The calendar is counting the last days of 2011 and for me it means time to check out Thailand. Why Thailand? I and two of my best friends were checking out places all over the world, but Thailand seems to be the best destination for a 3 week-escaping-trip from Germany. The flights are quite cheap (500eur Frankfurt to Phuket) and December is the perfect time period to enjoy Thailand. Well, before there was a hard raining season in Thailand, so we had to adjust our travel only to South-Thailand. Bangkok had to be skipped, actually really sad, but we had no boat and didn’t feel like swimming in the muddy flood.

However, let’s try the south of Thailand. The first days were supposed to be spent in Hotel directly at Patong Beach in Phuket. After arriving at Phuket Airport and wondering about the surprisingly high amount of single white men traveler, we took a cab to our hotel, an exciting ride between hundreds of motorbikes and TUK TUKS. While checking in,we were told by the receptionist, if we want to bring a “friend” over night we have to pay an additional 500 Baht. What a nice welcome offer^^, but it shows, what’s the main deal about Phuket and it explains all the male singles.

The beach not really differs from beaches I have seen before. A lot of high motivated Looky-Looky-Men selling you crap in the first place and drugs in the second. Besides that a nice panorama to drink some beers, check out girls or do some sports, not more. 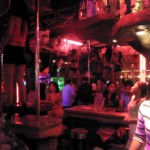 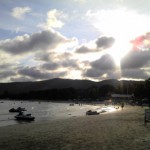 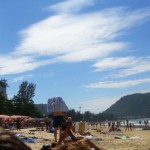 But what are the reasons to make vacations in Phuket? I found the one and more or less THE only answer in my first nightout in Phuket. The nightlife in Phuket is colorful, fun, multicultural, multisexual, crazy or insane hits it more exactly. It started harmful in a relaxed bar near to the Bangla Road with some beers and longdrinks, but when we finally turned into the Bangla Road itself, we dived in another world. In a world, where European moral and ethic has no value. The Thai-Girls are dancing on poles everywhere in the front-opened beer bars, waiting to rubbing your cock through the pants in the middle of the street. Trying to convince you for a drink and “further” activities. A lot of promotion guys offering tickets for any kind of show you can imagine. One of the bestseller seems to be the Ping Pong Show, they are everywhere. Nothing for me, I was just looking for a normal party/club, but I realized, in Thailand you have to adjust your definition of “normal” basely. The most disgusting thing in Phuket are all the Lady-Boys crossing the streets.

I was way to sober for all this stuff, so get me out of here into a normal club. The club, we checked out, was fun, hard electronic music, escalating party crowd and hot girls. But after a couple of hours and some small talk with the girls, it became clear, that the most girls are also hookers. Hmm maybe hooker is the wrong word. They are taking money for whatever, but I think they are searching for a damn stupid man, who takes her to Europe and marry her. Or at least they want you to fall in love and send her money or other present, which at least have a high value. But that’s Phuket, don’t hate the players, hate the game.

Check out this video to get an idea of Phuket. Actually it’s not Phuket, but the game is the same.

Enough with the pervert stuff. Let’s head up into the beautiful nature side of Thailand. Therefore we took a bus to the Phuket Harbour Pier and a ferry to Koh Phi Phi.The transportation in Thailand is really, I mean really cheap, you can cross the half country for 20eur. It’s amazing! Don’t expect any fancy busses or boats. It is not comfortable at all, but you will reach your destination and you are well accompanied by many back packers, who searching for a thrilling story exchange.

Koh Phi Phi is a small Island in Amdaman Sea. Our accommodations were two bamboo huts directly at the beach. Sounds beautiful and cozy, but inside it was dirty and stinky. However on Koh Phi Phi I met a lot of interesting people, far away from sex- tourism, here you can enjoy the other side of Thailand. Over the day we booked a tour to Maya Bay, the “must-seen” near to Koh Phi Phi. It is “THE BEACH”! If you have ever seen the movie “The Beach” with Leonardo Dicaprio, you know why. This place is absolutely incredible. A beach surrounded by huge cliffs. This place really impressed me. But see for yourself. 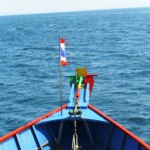 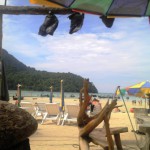 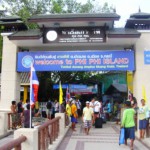 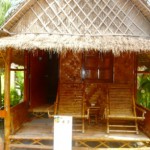 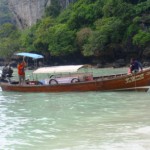 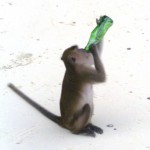 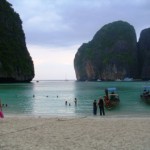 In our boat back to Koh Phi Phi we had a couple of drinks, while enjoying the sunset. A wonderful moment far away from any problems and concerns. So continued the night. On Koh Phi Phi the party is on the beach every night. There are a couple of beach bars with good music and nice dancefloors. Highly recommended. People from around the world partying with Thais…Really nice!!

We had just a couple of nights to enjoy Koh Phi Phi, then we took a ferry to Krabi, from there a bus to Don Sak and another ferry to Ko Samui. Really an annoying long bus trip. We made several stops somewhere in nowhere and the Thais invented senseless reasons for it. I mean after the third stop also the last idiot on board should check, that he is in the middle of the Thais “order food strategy”. But for the low transportation cost I shouldn’t complain. I was just a little pissed, because my first nightout in Ko Samui was ruined.

However the next day we checked out Ko Samui and I had a lot fun. There are nice bars and huge clubs to rock, nevertheless you are back in the sex tourism business as well. Not Phuket like, but the streets deliver also a mix of bars and clubs on the one hand and on the other a lot of table dance clubs and other red-light establishments.

For us, Ko Samui was just a checkpoint on the way to Koh Phangan. You have never heard of Koh Phangan?? That’s the place for the ultimate, insane FULL MOON PARTYs. I swear to god, I have seen a lot of crazy stuff in my live, but the FULL MOON PARTY on Koh Phangans Haad Rin Beach is absolutely ranked in the Top 5 of the sickest partys around the world. In a positive sense of course 😉 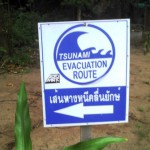 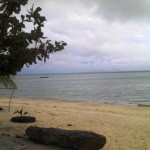 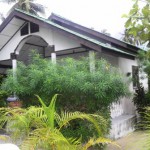 We had a reservation for a small house at the beach 15min by bus from the FULL MOON PARTY. We paid 15eur per night per person. Accommodations directly at the Haad Rin Beach during the full moon season are really expensive and you have to make a reservation for 5 days at least. Yes, the Thais are not stupid! So we preferred to invest the money in drinks at a small cozy beach bar next to our place. Nice bar to get a little drunk and meet some other full moon party people. It seemed to me, that some of some are already on Koh Phangan for years. Caught in the world of apparent freedom and psychedelic intoxication. But I don’t like to judge. Let’s head up to Haad Rin Beach and the FULL MOON PARTY itself.

Already on the way to Haad Rin Beach you will painted with neon colors and crazy symbols. Time to forget the real world and dive into the world of FULL MOON. Off the beach, the first bucket of Jack Daniels (or Thailands make me blind Whiskey) and you are already in the middle of madness. Electronic beats coming from everywhere, feel the spirit, jump some burning ropes, go for a slide, get a girl, rock the dancefloors on the water, do what you feel like. Here is the place for it. You will catch up with a lot of high guys, who are making wonder about the strict drug politic of Thailand. You still get the death penalty for drugs over there, but in full moon season these laws haven’t a real meaning. They are selling Joints and Mushroom Teas everywhere. In some bars they are on the card. Money rules the world, also Thailand. But back to the topic, after raving the whole full moon night on the beach the sun finally rises in FULL MOON CITY. An incredible beautiful sun rise coming with a purple sky behind the waves. Unbelievable!! This beauty stands in comparison to all the damaged faces around you. Yes when the light goes on, you realize it’s time to go home. I think I found the way back home around 10 am finally. I am sure some hardcore fullmooner made it a couple of days :p

From Koh Phangan we went back to Phuket, where we stayed another night before going back home to Germany. For me Thailand was great experience. Thailand has a lot of crazy stuff to offer and I love crazy stuff. Therfore I would recommend it and for its paradisiacal nature, although there were many negative points on my list. Thailand is a good country for backpack newbies. It is easy and cheap to travel through it and you will learn a lot for future trips.