This year in the beginning of November we (6 guys) headed up to Macau in China. Before we decided to go there we had a long discussion if Macau can compete with the original gambling/Party Paradise Las Vegas in Nevada US. The most online sources described Macau as a kind of boring, but I always want to make my own impressions and I always prefer to discover new places. I have been in Vegas a couple of time, so Macau now it’s your turn to be rocked. Back to the story. We started from Frankfurt, Germany, were in transit over Bejing and after a 16hrs travel we finally arrived in Macau. It was 1 pm and around 25 degrees. In the line of the immigration I realized we were the only Europeans between hundreds of Asian guys. Not a single other white person. For me no problem, but a new feeling to be a head taller than everybody else. 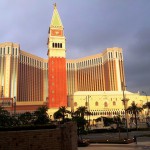 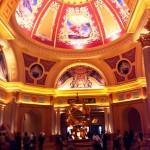 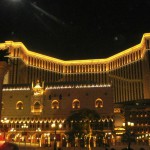 So let´s see what else Macau has to offer for young party animals and gambling addicts. First night was supposed to be spent in the Casino. Starting with some slots, continuing with roulette and ending up on black Jack tables. First impression of gambling in Macau: High min bets (30eur), no free alcoholic drinks (except MGM & Hard Rock), overall bad drink supply, Asian are serious gambler, the party flair of Vegas Casino is missing…

For the second day a trip to Hong Kong was planned. Hong Kong can be reached within 1 hour by Cotai Ferry for 12eur. So a Macau and Hong kong trip can easily combined. We arrived and 1 pm in Hong Kong, where we booked a room in Holiday Inn Hotel. We had no intension to sleep there. We just left our luggage there. New clothes for clubbing in the night and things like that. Then it was time for normal tourism stuff. Therefore we decided to enjoy the view over Hong Kong from the Peak. Absolutly THE must seen in Hong Kong. During the dinner at Bubba Gump on the Peak we made the plan for the night. 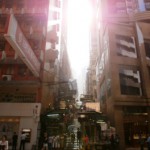 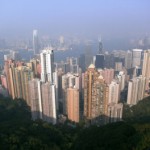 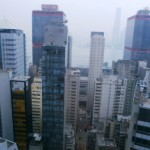 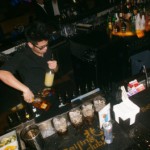 First a short pre-drinking in the hotel room, suit up, then for the Skyline Show “Symphonies Of Lights” off to the Ozone bar, which is located in the high-class Hotel Ritz Carlson. The bar is snobby, freaking expensive and quite boring, the Skyline show was also disappointing, just a few laser blinking between the skyscrapers. Not really impressive.

It was time to get action, therefore we headed up to the party-miles Lang kwan Fong and Wanchai, killed some Whiskey bottles in several bars. Then the escalation started in Bejing Club….later found myself back in VIP area drinking champagne with a lot of Chinese chics….the music was basically electronic mixed with some charts stuff from Ghuetta and co…not really my favourite, but absolutely danceable with 2/mil. After Bejing Club we entered some other clubs, but I don’t have a clue which ones….My reminds come back when we picked up our luggage at the hotel and took the first ferry back to our base in Macau. When we finished our after hour gambling with a plus of 1000eur we drunk our good night champagne and went to bed 1:14pm…

I spent the third day in bed until the evening, ordered several times the room service before I decided to quit the hangover with some whiskey-cokes and an Absinth. The party-mood came back and it was time to check out a club in Macau. The time passed already midnight, so we checked out the DD3. There the party gets crazy around 2 am. DD3 has some specials to offer. First we got 2 for 1. Two bottle of Chivas Regal with Coke, Ice and stuff for 80eur. Under every table the cups and dices to play a Chinese drinking game. Couldn’t find out the name, but we caught some girls and enjoyed playing with them. The chics in DD3 were in average. Some were hot others ugly. To sum up, DD3 is a nice late club with very acceptable prices and a solid party atmosphere.

The next day was the best one in Macau. Why? This question can be answered with the double C…. Club Cubic. This paradise on earth is located in the City of dreams (Hard Rock Hotel). Club Cubic is quite expensive, but you know for what you are paying. This club has everything, a perfect ambience, nice tables (reservation required), good music, a hot show on stage, champagne flows in hector-liters. But the best is the perfect mix of the crowd. There are nice party people, rich Asian snobs, the most beautiful Chinese girls I have ever seen and high-class prostitutes. Haha no joke, be careful if you hook up with an incredible chic, who was surprisingly easy too catch. One guy told me that all prostitutes, working in local sauna-clubs, are entering the nightclubs after 2am to make some extra money. However, if you spend time in Macau, don’t miss to go partying in Club Cubic. To hit the best night, check out the events. There are also a lot of stars performing in Club Cubic. 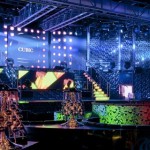 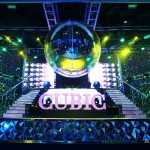 The last day in Macau we gambled a lot and in the night we conquered Macau downtown and decided to check out gentlemen club Devino. It’s located in IA-Tower directly next to the D2 nightclubs. A perfect possibility to use it for a decadent pre-drinking with extremely hot dancer-chics. Devino is a real high-class gentlemen club (to avoid the word stripclub) with chics from around the world. If you order a bottle, it will arrive with hot accompaniment. One chic for each guy. You can just have some drinks with the girls (which you have to pay of course) and some small talk or you pick the hottest girl and go with her for a private lapdance. Cost for a dance is around 40eur/song or you take the 5 song offer for 150eur. I think this option is with happy end, but I am not sure. There are NO no-touching rules and the girls are really giving their best (as a friend told me).

But I am digressing. After this divine pre-drinking we stepped one door further in the night-club D2. Very good hard electronic beats, nice girls, a few drunken Europeans, who were searching for a fight (shame on them) and good drinks. What else can I tell you about D2, hmm not that much. I had a couple of drinks, was dancing a little bit and then I went home to my suite in Venetian. I was absolutely done and the 19 hours trip home was horrible after this party- and gambling marathon.

But I swear to God Macau is an amazing place, which can totally compete with the original Las Vegas. I am not looking forward to make the decision between Macau and Vegas for my next Gambling-Partying-Trip…..